Notice is hereby given that the next meeting of the Tawonga and District Community Association will be held at the Tawonga Fire Shed on the 7th February, 2020 at 7pm.

All members and any interested community persons are welcome to attend.

If you have any items that you wish to raise at the meeting, please contact the Secretary by email tdca@tawonga.vic.au so that they may be included in the agenda.

The Tawonga community extend their very best wishes and congratulations to Eric for this wonderful milestone! 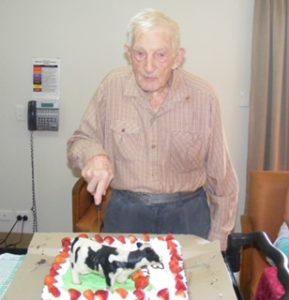 The official opening of the Tawonga Pioneer Park War Memorial was held on the eve of Remembrance Day, Sunday 10th November at 7.30 pm.

From settlement in the late 1860’s and by the turn of the century, Tawonga had become a thriving community. When war was declared in 1914, a number of Tawonga and district residents enlisted.

The memorial honours the servicemen and women from Tawonga and district and their connection to the armed services, their involvement in the various theatres of war and in peacekeeping roles.

Our thanks go to the Kiewa Mitta Murray Community Enterprises Ltd, Victorian Veterans Council and the Upper Kiewa Valley Lions Club for their funding assistance to this project. We also thank locals who officiated the opening- Les Jordan from Mount Beauty RSL, Lisa Russell who is currently serving in the Royal Australian Navy for reading the Ode to the Fallen, and to Arthur Higginson, son of 1st World War soldier Henry John Higginson for his duties in lowering the flag.

We invite you to explore the pictorial narrative of the memorial and the opportunity it provides to reflect through the imagery of the respective defence services across the eras.

In 2019/20 Council will work with the Tawonga community to prepare plans which illustrate, cost and prioritise:
Improved streetscape treatment of the Kiewa Valley Highway, including a safer pedestrian connection to Tawonga Pioneer Memorial Park, pedestrian pathways extending along the highway and integrated landscape treatments to give the Tawonga township an improved sense of destination.
Improvements to Tawonga Pioneer Memorial Park, including upgraded and additional facilities and infrastructure.